VVVVVV is a 2D puzzle platform game designed by Terry Cavanagh.The game was built in Flash and releasedJanuary 11, 2010 for Windows and OS X on the Steam platform. The game was ported to C++ by Simon Roth in 2011 and was released in Humble Indie Bundle 3. The C++ port allowed a Linux version to be created. It has been released in the Nintendo eShop for the 3DS and Nintendo Switch and a binary port is being made for Open Pandora. However, the Open Pandora port will require the Windows, OS X, or Linux data files to function.

The player controls Viridian, a spaceship captain, who has to evacuate his ship along with the rest of his crew when the ship encounters "Dimensional Interferance". The crew escapes through a teleporter; however, the teleporter separates the crew. After returning to the ship, Viridian learns that they are trapped in an alternate dimension (Dimension VVVVVV). The player's goal, as Viridian, is to find all the ships crew members, and escape the dimension.

Unlike most platformers, the player can't jump. Instead, the player must flip gravity while standing on a surface. The player utilizes this to traverse the game's enviroment and avoid various hazards, including stationary spikes and moving enemies. Later levels introduces such as moving floors or rooms, which upon reaching one side, the player emerges on the other. The game has 8 main levels inside a large world which the player can freely explore. Due to the high difficulty, there are many checkpoints that the player resets to upon death. 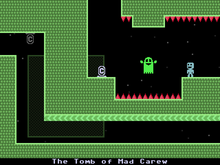 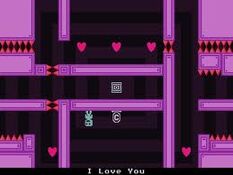 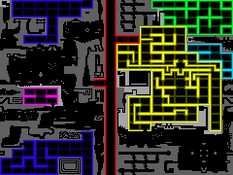 Dimension VVVVVV's in-game map.
Add a photo to this gallery
Retrieved from "https://vvvvvv.fandom.com/wiki/VVVVVV?oldid=4415"
Community content is available under CC-BY-SA unless otherwise noted.